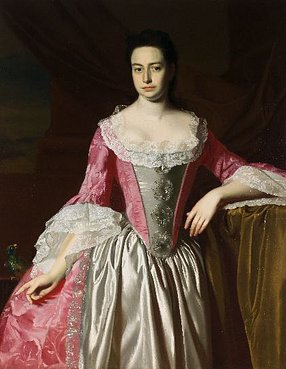 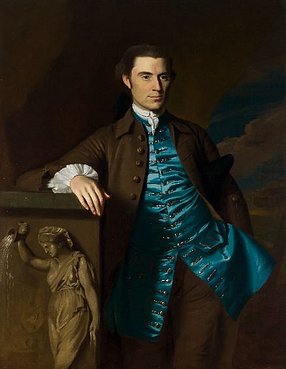 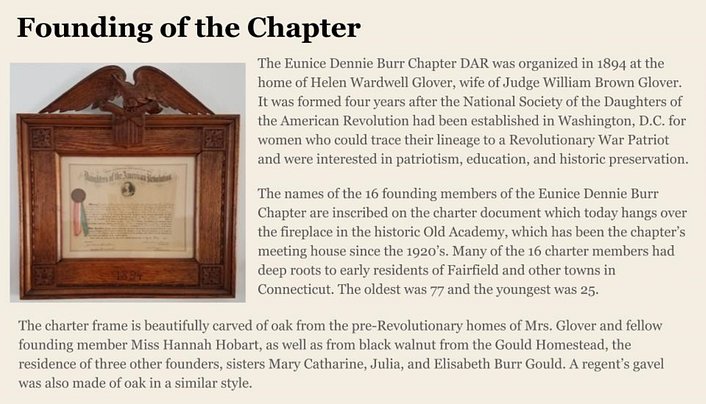 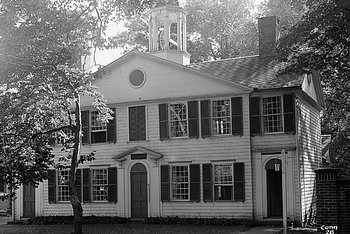 Claire Booth Luce was a member of the Eunice Dennie Burr Chapter of the DAR.  Learn more about her in "Today in CT History" by clicking the link below shared by member Betty O.

EUNICE DENNIE BURR was chosen as the chapter’s namesake when it was organized in 1894. She was an apt choice for a society whose goals were to promote patriotism, education, and historic preservation.

Born in Fairfield about 1731 to James Dennie and Eunice Sturges, she was considered one of Fairfield’s most accomplished and charming women. Her great-grandfather was Rev. Samuel Wakeman, second pastor of First Church Congregational from 1662 to 1692, and her family was one of means and influence. She married her cousin Thaddeus Burr, grandson of Chief Justice Peter Burr, on March 22, 1759, at a ceremony officiated by Rev. Andrew Eliot of First Church. Thaddeus was one of Fairfield’s leading citizens and together they became Fairfield's  “First Couple,” entertaining with great hospitality at the Burr Homestead, their stately home on what is now the Old Post Road.

Thaddeus Burr, Esq. owned a large estate, was a graduate of Yale, served in various public offices, and during the Revolutionary War, was a member of the Committee of Safety, and was instrumental in obtaining provisions for the Continental Army and Naval Forces. He was a friend of some of New England’s most prominent citizens during the Revolutionary period, most notably John Hancock of Massachusetts. The Burrs visited his home in Boston before the War, and after the Battle of Lexington and Concord, Hancock sent his Aunt Lydia and his fiancé Miss Dorothy Quincy to stay with the Burrs in Fairfield. The marriage of John Hancock, then president of the Second Continental Congress, to Dorothy Quincy was a great social event celebrated at the Burr Homestead in August 1775.

At a time when wives of influential men were expected to support their husbands’ efforts both personally and socially, Mrs. Burr entertained many prominent figures before and during the Revolution, including John Adams, Roger Sherman, Marquis de Lafayette, and General George Washington. She and her husband had their portraits painted by John Singleton Copley. These portraits are now owned by and on view at the St. Louis Art Museum.

As a woman of status in the community, Mrs. Burr played a role in one of the most important events in the history of the town of Fairfield, when in July of 1779, some 2,000 troops under British Generals William Tryon and George Garth came ashore and set fire to the town. Mrs. Burr, having met Gen. Tryon before the War, sought to use this influence to save her home and the surrounding area by appealing to the better instincts of the men under his command, but to no avail, as almost the entire town was destroyed, including her home. In fact, she was stripped of her silver shoe buckles by enemy soldiers and watched while her home was being ransacked, fleeing to safety in the marshes behind her home as it was engulfed in flames.

Her dramatic testimony about Tryon’s Raid, as well as depositions of other Fairfielders, can be read in their entirety in the Public Records of the State of Connecticut with the Journal of the Council of Safety from May 18, 1778 to April 28, 1780, Vol. 2, published by State Librarian Charles J. Hoadley in 1895.

Although the Burrs were childless, they remained close to nieces and nephews and other family members throughout their lives. The Fairfield Museum and History Center has affectionate correspondence from Mrs. Burr to her husband’s cousin Sally Burr Reeve, wife of Tapping Reeve, founder of Litchfield Law School, and sister of Aaron Burr, who became vice president and killed Alexander Hamilton in a duel.

After her husband’s death in 1801, Mrs. Burr helped establish a private school, the Fairfield Academy, built in 1804, and she is credited with ensuring that girls could attend as well as boys. This historic building is the chapter house of the Eunice Dennie Burr Chapter, whose members saved it from demolition many decades ago.

Eunice Dennie Burr died on August 14, 1805 and was buried next to her husband Thaddeus in the Old Burying Ground on Beach Road.

Chapter House of the

National Society of the Daughters of the American Revolution

Academies, or private preparatory schools, increased in number after the Revolutionary War. In 1802, some Fairfield citizens founded the Fairfield Academy so that their sons could enter Yale and their daughters could receive a semblance of a classical education. Forty-three persons bought shares, among them Eunice Dennie Burr, widow of Thaddeus Burr, who bought 9 shares. Many people donated labor instead of money, and by May 1804 the Academy had been erected on the Old Post Road, next to the town jail (!), where the education building of St. Paul’s church stands today.

Classes for about 60 students began that year. William Stoddard was the first teacher. The boy who rang the bell, an important feature of the school and one that was the object of much mischief, was awarded with a tuition discount or was paid a small fee. At first, the school bell was rung at 5:30 AM, with the school day beginning at 6 AM from March 20 – September 20. Later in the century, the day began at 9 AM and ended at sunset, with an hour break at the noon hour.

In 1835 the holidays consisted of Thanksgiving, the Friday following New Year’s Day, Fast Day (a Connecticut holiday proclaimed by the governor) and Independence Day. Christmas was not observed until after 1850, becoming a federal holiday in 1870. There were vacations of 2 weeks in April and 2 weeks again in October. Later there was a summer vacation of 2 months. Teachers for many years were chosen from among Yale’s most promising graduates by Dr. Timothy Dwight, pastor of Greenfield Hill Congregational Church and president of Yale University. There was a rapid turnover, however, since the young schoolmasters often left for careers as clergymen, lawyers, journalists, or politicians. The first female teacher arrived in 1831 and taught needlework, including the creation of fashionable bead purses. Spelling bees were popular after the 1828 publication of Webster’s American Dictionary of the English Language. Other subjects taught included penmanship, using homemade ink and teacher-made quill pens, science (called “natural philosophy”), geography, history, mathematics, Latin, and Greek.

There was separation of the sexes, with boys and girls having separate entrances, stairs, cloakrooms, and recesses. Neither did boys and girls sit together in class. The students played on the Town Green, and on Edward’s Pond popular for boating and skating (and in the 1600’s “witch dunking”). Edward’s Pond was the area behind where the Old Academy and the Fairfield Museum and History Center stand today. Games that were popular among the students were marbles, One Old Cat, precursor of today’s baseball, hopscotch, and jumping rope. No ball playing was allowed near the building, nor was it allowed after dark or on Sundays during worship.

Students were usually aged 10 to 16, and some came from as far away as New York, boarding in the town. It was a boarding student who told her landlady, Miss Sarah White, one evening that she had seen a boy throw glowing coals into ash barrels that day. Miss White and Miss Mary Hobart ran to the building and pushed the smoldering barrel out onto the snow just before it burst into flames. Fire was always a possibility. At first, the school was heated by fireplaces, one at each end of both floors of the building. Later wood-burning stoves were used. In 1835 there was one large cast iron stove in the center of the room. Of course, this benefitted only a few children, until one stove was added to each end of the room.

Students occasionally played “hooky” by intentionally falling into the pond and being sent home, but punishments for infractions were unpleasant. “Feruling”, striking the palm of the hand with a ruler, and isolation in the cloakroom were common. So were ear and hair pulling, shaking, head-thumping, and sitting on the end of a sharp piece of firewood. Fairfield children were said to be wilder than Weston children, or “inland” boys.

The Academy played an important role in the life of the town. In 1815, 150 men celebrated victory in the War of 1812 at a banquet in the upstairs schoolroom, feasting on an ox that had been roasted on the Town Green. The downstairs room was regularly used for school recitations, singing lessons, and religious services. In 1832 the Female Benevolent Association of Fairfield served the first ice cream made in town at a fair held in the building. The Academy was also home to the first public library in Fairfield, begun by teacher Morris Lyon in 1875. Between 1915 and 1924 it housed the Old Academy Tea Room, and the Red Cross occupied it during World War II.

Fairfield Academy ceased to exist about 1884, but other private institutions, like the Home School for Boys across the street, used the building until the early 20th Century. In 1904 there was a 100th year reunion of all alumni who hoped that the now-decrepit structure could be restored. In 1920 demolition was considered, but the twenty-five-year-old Eunice Dennie Burr DAR Chapter, several of whose members had attended the Academy, was determined to save it. Led by DAR member and town benefactress Miss Annie Burr Jennings, a joint committee with the Fairfield Historical Society (now the Fairfield Museum and History Center) held a vigorous and successful fundraising campaign and restoration was begun. The downstairs room was divided into two rooms to support sagging beams, stairways were strengthened or rebuilt, the cupola was repaired, a back hallway, kitchen, and lavatory were added, and the plain fireplaces were enhanced with elegant new mantels. Electricity, a furnace, and radiators were installed. In 1925 the Town voted to allow the DAR and the Historical Society joint occupation, so long as they existed, and when the latter acquired its own building, the DAR occupied the building alone. In 1958 the building was moved from its location on the Old Post Road to its present location, behind St. Paul’s Church across the parking lot on the right side of Fairfield Town Hall. While the Town maintains the exterior of the building, the DAR proudly maintains the interior and created a schoolroom museum on the second floor in time for the country’s bicentennial celebration.

The Academy is a fine example of architecture and was listed by the Historic American Buildings Survey, done by the Works Progress Administration during the 1930’s. Drawings and floor plans, as well as photographs can be seen in the website of the Library of Congress.

Member, Cathy T. shared the following article "10 Amazing Women in the Revolutionary War" from "All things Liberty, Journal of the American Revolution".  Follow link below: